Jack J. Sophir Arrowman of the Year and Jack J. Sophir Lifetime Achievement Awards are presented each year at the Chapter Fellowship Banquet in February. If you believe someone is worthy of either award, nominate that person; do not expect someone else to do it, as they may go unrecognized.

Past Recipients and Resumes

Pathfinder Chapter is looking for your Scouting Resumes.  Resumes are used to help Arrowmen nominate fellow Arrowmen for these awards and for the Vigil Honor, providing information that may be required on each nomination form. Fill one out today and mail it to our Chapter Advisor, Joel Schwartz, to aid in the application process. 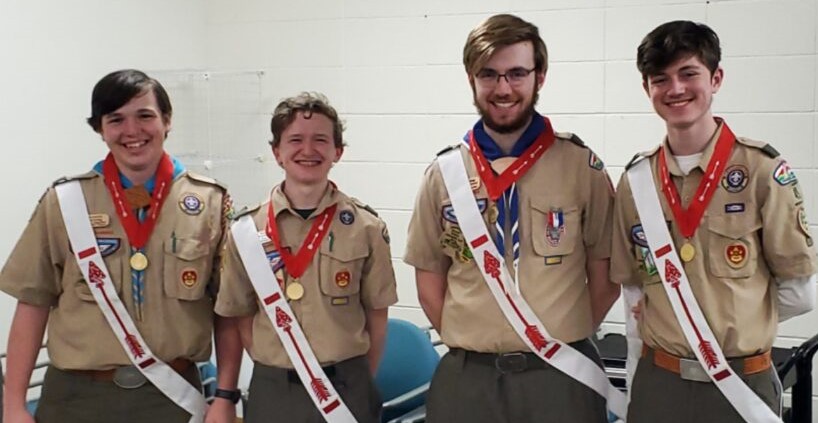 Scout Lorenzo Gutting has shown exemplary leadership in the chapter as a member of the ceremonial team and leadership. Lorenzo came into the order full force in the ceremonial team while also serving as the Ordeal chairman. He learned his lines lightning-fast and did a fantastic job on his first performance performing both the Pre-Ordeal and Ordeal ceremony at a 2020 Induction weekend. He has steadily learned many roles and ceremonies over the past two years and is still an active member of the ceremonial team.  Loenzo is currently serving as the chapter Ordeal chairman. He is also the current SPL of his Troop (362). For his cheerful service, we wholeheartedly present Lorenzo D. Gutting the Jack J Sophir Arrowman of the year award.

Scout Neil Maxwell has done a superb job of being involved and active in his troop and the Order of the Arrow. He has been on the ceremonial team since he was elected into the order, and has done well-performing ceremonies. He is serving in his second term as Chapter Second Vice-Chief. He is very organized and responsible in all of the roles he has taken on. Neil has been a pivotal member of the Pathfinder Chapter and he is always happy to step up and offer whatever services are needed to get the job done. He takes his involvement very seriously and is a solid member of the ceremony. It is with an exuberance that we present the Jack J Sophir Arrowman of the year award to Neil T. Maxwell.

Scout Declan O’Leary has been a welcome addition to the chapter over the past several years.  Actively participating in chapter activities since his induction into the Order of the Arrow.  Declan began his leadership within the chapter as Troop OA Representative for a couple of years, frequently serving as an Elangomat, and is now serving as the chapter’s First Vice-Chief.  He has been an integral part of the chapter willing to step up and volunteer whenever anything is needed.  Besides his role in the chapter, he has been serving his troop (49) as Senior Patrol Leader.  For his overwhelming service to the chapter we present the Jack J Sophir Arrowman of the year award to Declan B. O’Leary.

Eagle Scout Ben King became an active member of the chapter by attending all chapter and lodge activities.  He first served as the chapter in the role of Service chairman and then with little knowledge of building websites, Ben volunteered to become the chapter Webmaster chairman. He served for multiple years and picked up the WordPress software rather quickly. We are fortunate that he continued his service when he was elected Chapter Chief at this past Fall Reunion. Besides his chapter leadership, Ben has served his troop as Senior Patrol Leader and the Lodge as LodgeMASTER chairman and Founders Award chairman.  It is with great honor that I present to Benjamin King the Jack J sophir Arrowmen of the year award.