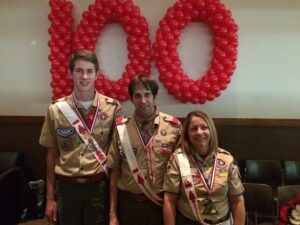 Eagle Scout Brendan Boyle has provided tireless, cheerful service to his Chapter and the Shawnee Lodge. He has served in multiple Chapter Chairmen positions and, last year, served as his Chapter’s First Vice Chief. He has displayed his dedication to his chapter during his term as Troop Rep Chairmen, taking time to personally contact every troop when an issue with the Chapter’s postcard mailing for a meeting arose. As First Vice Chief, he continued to seek ways to help improve the Chapter. In recognition of his willingness to unselfishly serve his Chapter and fellow Arrowmen, we wholeheartedly nominate Brendan L. Boyle for the Vigil Honor.

Scouter Joel Schwartz plays an essential role in his Chapter’s communication. As Webmaster Adviser, he has guided youth to provide a valuable resource for Chapter information. He supports his District’s Roundtables, helping to organize and lead meetings. Furthermore he has proven to be an essential part of his Troop, supporting the youth in delivering an outstanding program. For his unending devotion and service to his Troop, District, and Chapter, we humbly nominate Joel M. Schwartz for the Vigil Honor.

Scouter Heather Henderson has worked tirelessly to ensure that District camping and Order of the Arrow programs are successful. She unselfishly served as Ceremonial Team Adviser for her Chapter, aiding youth in preparation of regalia and providing leadership to multiple Ordeal and Crossover teams. She currently serves as District Camping Chair, enabling youth Campmasters to produce quality programs. For her unwavering dedication and her unselfish service, we proudly nominate Heather H. Henderson for the Vigil Honor.