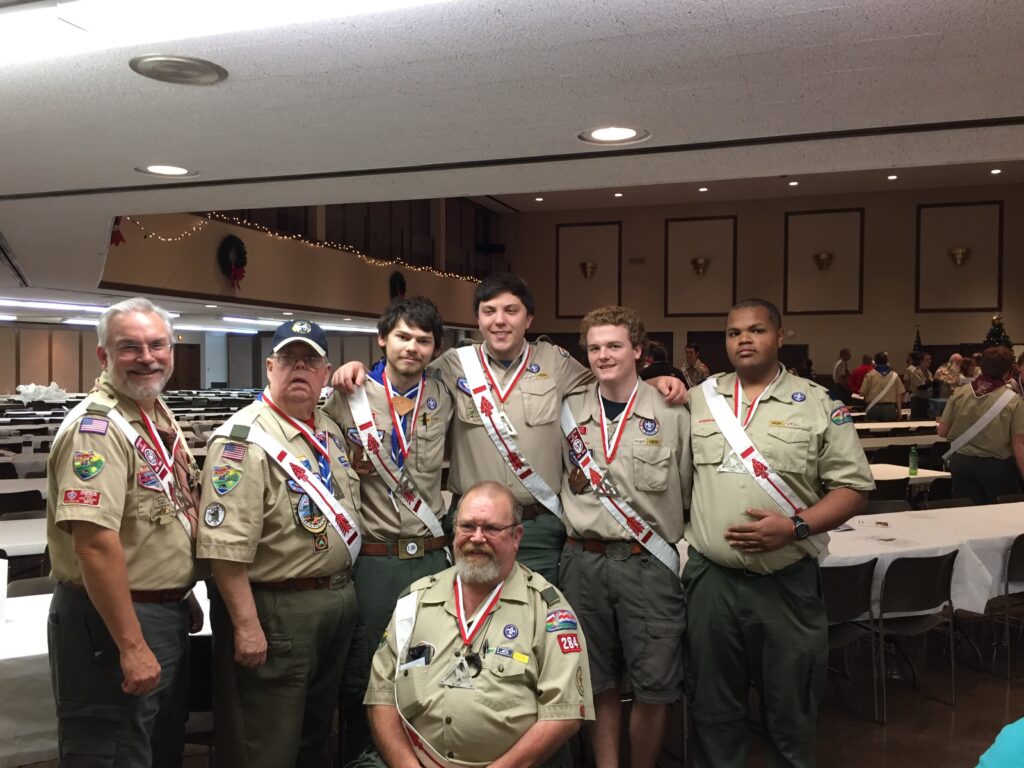 Scouter Dan Stoeckel is a member of our Lodge who is absolutely devoted to cheerful service. He strives to find opportunities to help out where he can and, in doing so, he is involved in helping with Troop functions, District Camporees, and Outdoor Leader Training. Dan helps in the Chapter by promoting and aiding Ceremonial Teams and serving as a Ceremonial Adviser. For his continued service to Scouting and our Lodge, we humbly nominate Daniel A. Stoeckel for the Vigil Honor.

Scouter Greg Webb is the absolute epitome of what is looked for in a Vigil Candidate. He is a humble, selfless servant who cheerfully serves others and the Scouting Program. Greg is heavily involved in his District and our Council. Greg serves as Pathfinder District’s Training Chairman, he is a member of Pathfinder’s Quartermaster Corps, he has been a Unit Commissioner for 25 years, he serves on the Catholic Committee on Scouting, overseeing Catholic Adventure Week at Swift, and he has been Camp Master for 22 Cub Scout Day Camps. It is readily apparent that he has made distinguished contributions to the Scouting Community and the Scout Camping Program, and it is for this reason that we eagerly and wholeheartedly nominate Gregory R. Webb for the Vigil Honor.

Eagle Scout Matthew Beyes has diligently served Scouting and the Order of the Arrow for many years. Matt has humbly served his troop in many different positions, including two terms as Senior Patrol Leader. He is currently serving as Chapter Chief, he has received his Chapter’s Arrowman of the Year award, and attended the National Order of the Arrow Conference. Matthew has been a leader of his Chapter’s Ceremonial Teams and has dedicated himself to the camping program by serving on Camp Staff and many Camporee Staffs. For these, and many other reasons, we enthusiastically nominate Matthew J. Beyes the honor of Vigil.

Eagle Scout Zack Becker has enthusiastically served the Order of the Arrow and Scouting. Zack has demonstrated leadership as his Troop’s Senior Patrol Leader, as his Chapter’s Chief and Troop Representative Chairman, and as the Section and National Events Chairman for the Lodge. Zack has participated in many OA programs including the National Leadership Seminar, National Order of the Arrow Conference, and OA Trail Crew at Philmont. Zack has served on our Council’s Summer Camp Staff, as a Ranger at Philmont, and as the Campmaster for one of his District’s Camporees. For his passionate and consistent dedication to the Order of the Arrow and the camping program, we wholeheartedly nominate Zackary E. Becker for the Vigil Honor.

Eagle Scout Christopher Hahn has shown tremendous leadership and dedication to Scouting. Since his induction into the Order, he has served his Chapter as Ordeal Chairman, Brotherhood Chairman, and is currently Second Vice Chief. Christopher’s biggest passion is in Ceremonies where he has played roles in the Ordeal, Brotherhood, and Pre-Ordeal Ceremonies. His tireless work in his Chapter earned him the Chapter’s Arrowman of the Year award. Christopher has been a very active member, attending Camporees, NYLT, four Summer Camps, and two High Adventure Camps. Christopher has also served on three of his District’s Camporee Staffs and two summers of our Council’s Summer Camp Staff. For his continuous service in all of these areas, we cheerfully nominate Christopher J. Hahn for the Vigil Honor.

Eagle Scout Zach Russell has exemplified unselfish service and devotion to the Camping program, Pathfinder District’s Venturing program, and the Order of the Arrow. Zach has served several summers on the Council’s Camp Staff, working at both Camp Gamble and Camp May. He has also made contributions to his District’s Camping program, serving on an unmatched number of Camporee Staffs. Zach has also led his Chapter as First Vice Chief and currently serves as an officer at the District level in Venturing. For his enthusiasm and unselfish contributions to the Order of the Arrow, we honorably nominate Zachary Russell for the Vigil Honor.

Scouter Mark Zumwalt has demonstrated continuous support of the Order of the Arrow and the camping program for over twenty years. For his Troop he has served as Committee Chairman, Chartered Organization Representative, Merit Badge Counselor, and Provisional Summer Camp Scoutmaster. For his District he has provided logistical District leadership for Fall Reunions, Spring Conclaves, Camporees, and other events. For the Council, Mark has planned and lead logistics for various events including the recent Community Emergency Preparedness Summit. For his dedication and behind-the-scenes support to the youth of the Lodge, we enthusiastically nominate Mark D. Zumwalt for the Vigil Honor.